Hi everyone, a new chapter for a new day ^.^ Once again, thanks for reading, likes and comments. I saw a lot of hate comments towards MYZ, well no worries, coz I do too. Nyahaha… Anyway, the story will reveal bit by bit the answers to our confusions. So watch out for more chapters and keep monitoring your blood pressure. fufufu ^.^

Chapter 7: She is pregnant

“You’d better make sure that you got pregnant this time! Don’t expect him to touch you again!” The woman left bitter words and walk away.

Yun Shishi collapsed on the ground, her spirit has left her body. The Secretary quickly picked her up, “Get up, the ground is cold!”

At the Mu private hospitals, the Secretary got the medical result.

Seven weeks of pregnancy, the fetus is stable and a pair of identical twins.

She picked up her cell phone and reported the results to Mu Yazhe’s assistant. Yun Shishi came out from the examination room like a puppet. She didn’t show any care about the medical results.

In any case, she was only doing her job, she’s only complying to all their arrangements and doesn’t worry about other things.

The secretary came over to her and smiled,: “Miss Yun, you are in a good condition, so there’s nothing to be nervous. You don’t have to worry about anything else, this month just stay in the villa and have a peace of mind. Whatever you may need, don’t hesitate to tell me.”

Yun Shishi looked up and said: “I want to see my father.”

Two months ago, she just left a note that she will leave, she’s worried that her father should be very anxious by now!

The Secretary said, “This … … the president told you, you can’t go out.”

This matter will really put her in a tight spot, according to the terms of the contract she cannot go out, but the Secretary think that this girl is too pitiful. She’s still in her teenage life but she’s doing surrogacy.

Presumably, she thinks that there will be no problem, so she arranged for their meeting without the knowledge of the president.

Their meeting location is in a cafe in the center of the city.

When Mr. Yun received a text message, he went in a hurry. He arrived half an hour earlier and sit restlessly in the box chair. Since Yun Shishi didn’t say a proper goodbye, he got so worried, every night he can’t sleep, he just keeps tossing and turning, that made his wife rant in front of him as she called Shishi a supercilious wolf, saying that she heartlessly ran away with who knows man it is.

The family quickly fell in distress,  Yun Shishi’s father didn’t know where she went, but the next day he unexpectedly received 1 million in his bank account, subconsciously he thought that this matter was related to her leaving the family and went to some bad organization.

In fact, Yun Shishi is not his own daughter, ten years ago he didn’t actually intend to adopt someone in the orphanage because he has his own daughter. At that time, the Yun family was still rich, he saw that Yun Shishi was a sensible and well-behaved girl, his heart got very satisfied with her. Though his wife and daughter were so against it, but still he didn’t mind, thinking about the little girl being sensible, she might sooner or later be recognized by his wife and daughter.

However, he was wrong.

He is usually busy at work and has no time to spare with his family affairs. But, he is a father, so how could he not know that when he was away from home his wife and daughter were bullying Yun Shishi?

But Yun Shishi was so sensible, even in the face of grievances because of those two people, she never cried to him even once. He just told to himself that her heart is not at fault.

In fact, his family was very wealthy, there is a listed asset under their name, they were all profitable and stable, so their life is well-off. But earlier this year a financial crisis swept the world, the sudden disaster overwhelmed the entire family’s wealth.

7 thoughts on “Chapter 7: She is pregnant”

Hi Everyone, if you want to support this translation just click on our twins below, the image is linked to PayPal. Any amount of donation to support my translation will be very appreciated! Thank you very much. 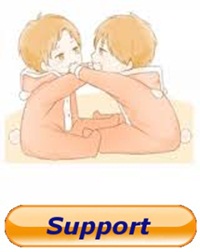